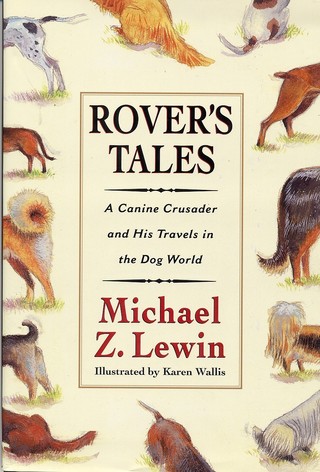 This is the American hardback and the cover's the same for the book and the audio version. (Click here to go to Blackstone Audiobooks.) But the illustrations on the inside, by the estimable Karen Wallis, do not match what's on this cover. Look below: 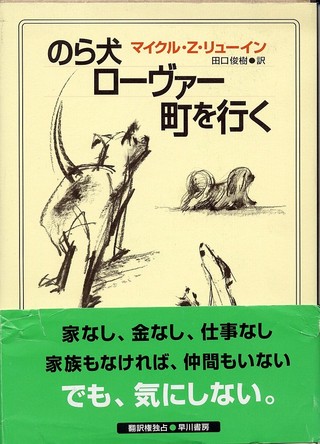 This Japanese hardback used some of Karen's drawings for the cover too. They'll give you a bit of a sense of the pictures inside all editions of Rover's book.

Rover is a stray dog who narrates thirty-six very short stories in ROVER'S TALES. They describe how he tries to improve the lot of the dogs he meets as he wanders a city one summer. The city is Indianapolis, but he doesn't know it.

Rover's narrations establish that he is a dog with a mission to help other members of canine kind when they’re in trouble. More often than not, the trouble is caused by human beings. For the life of him, Rover doesn’t get why people do some of the things they do.

In the “Washington Post” David Nicholson wrote of this book, “…the best of Rover’s tales are moving enough to… bring tears to your eyes. They’re so good, in fact, that I wish Lewin… had given us a more conventional narrative with a beginning, middle and end. It might not have been a happy ending, but I would have gone all the way to it.”

The stories cover all kinds of territory and I’ve read many of them to audiences - from smart eight year-olds up. They’re stories about dogs, sure, but they’re also very much about the nature of people…

I also did an unabridged audio tape for Blackstone Audiobooks - click on the ROVER'S TALES picture for a link.

TELLING TAILS includes nine of the Rover stories that were later repeated in the larger book. Because the idea of a talking dog was not, shall we say, an easy sell I went ahead and published this PawPaw Press edition myself. In fact it was this little book that the St. Martin's editor read, resulting in the big book.